Many people have visited the beautiful Judean desert oasis of Ein Gedi on the shore of the Dead Sea. As you make your way up the David stream toward the spectacular waterfall at its head, you revel in the lush vegetation on its banks – such a contrast to the arid desert surroundings – and spot basking rock hyrax and the agile wild goats, the ibex. But, what few know about are the sights to be seen if you follow Ein Gedi’s other stream, the Arugot.

Ein Gedi has served as a refuge and habitation from the earliest times, and many of its previous inhabitants have left traces of their lives there, which can still be seen today. As you climb up the stream path, you pass the remains of a 14th century Mameluk flour mill, a 4th century synagogue with a beautiful mosaic floor, and the mound of the ancient Israelite settlement of Ein Gedi. But right at the top of the cliff, with its breathtaking view over the desert and the Dead Sea, are the oldest traces of humankind, a prehistoric temple built over 5,000 years ago. 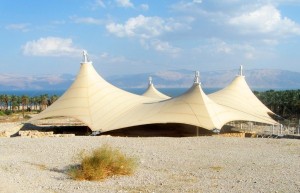 Because this temple dates back to before the time of writing, we can only guess at the type of rites practiced there. The temple contains a small shrine, and there is what looks like a basin in the courtyard, which may have been used for some ritual involving water – a precious symbol of bounty in a region, which sees 10 inches or less of rainfall a year. But we can certainly understand how the awe-inspiring setting of the temple, atop the cliffs of Ein Gedi,  moved the ancients to choose this location as the site for their worship. 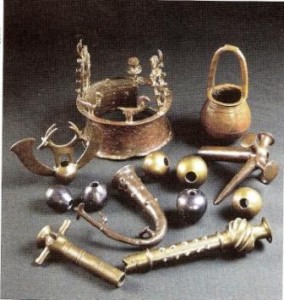 This period was the time when people first worked with copper, and a trove of exquisitely fashioned copper objects was found in a cave not far from Ein Gedi; it is likely that the worshipers in the temple used these objects in their rituals. The trove, which was found carefully wrapped in basketware, had no doubt been hidden for safe-keeping with the intention of being recovered. However, no one ever returned to claim these precious objects; they – like the temple itself,  which was just abandoned and left intact – were destined to remain hidden for 5,000 years.