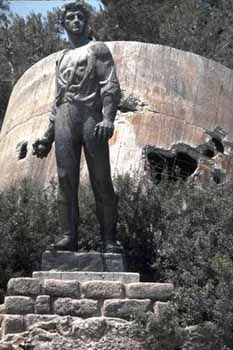 If you only have time for one Holocaust memorial and museum in your itinerary, then of course you should make a visit to Yad Vashem a priority. However, if you have a little more time, you should consider also taking a short trip outside Jerusalem to Kibbutz Yad Mordechai.

When it was established just north of the Gaza strip in 1943, Kibbutz Yad Mordechai was called by a different name; but at the end of the second world war, the members of the kibbutz – originally immigrants from Poland – decided to rename their settlement in memory of the leader of the Warsaw ghetto uprising, the 22 year old Mordechai Anilewicz, who some of them had known from the Zionist youth movement they had all belonged to prior to the war. There is a monumental bronze scupture of  Anilewicz in front of the original kibbutz water tower, created by Nathan Rappaport, the sculptor of many Holocaust-related works located elsewhere in Israel and in his native Poland. When they renamed their kibbutz in honor of the leader of the Warsaw ghetto fighters, little did the members of Yad Mordechai know that they would soon be facing their own days of trial and heroism.

Immediately after Israel’s declaration of independence in May 1948, 5 Arab armies invaded the new state. Two Egyptian armored brigades headed up the coastal road from Sinai, on their way to Tel Aviv; two kibbutzim straddled that road , Kfar Darom  – toward the south of the  Gaza strip – and Yad Mordechai. Meeting unexpected resistance from Kfar Darom, the Egyptians went around it and headed for Yad Mordechai. There, about a thousand Egyptian troops, artillery, tanks and aircraft faced off against 120 kibbutz members with rifles, two machine guns, and two mortars. In spite of the uneven odds, and with many casualties, the Yad Mordechai defenders held off the Egyptian assault for five days, before evacuating – five days which proved crucial in allowing the infant state of Israel to organize its defenses further north. Today at the rebuilt Yad Mordechai you can visit the site of the battle, and see the defensive trenches of the kibbutz facing a re-creation of the Egyptian attackers.

In addition to the battlefield simulation, there is a small museum in the kibbutz dedicated to the memory of the Warsaw Ghetto fighters. In it, you can see and walk through a re-creation of a section of the ghetto and of the famous Mila 18, headquarters of Mordechai Anilewicz and his courageous fighters. It is well worth a visit.