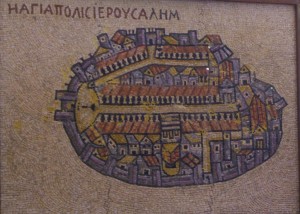 The Church of the Holy Sepulcher in Jerusalem , which houses under one roof all of the sites associated with the crucifixion, burial and resurrection of Jesus, is rightly considered the most important Christian monument in the Holy Land. The present structure replaces an earlier one, built in AD 335 at the direction of the Emperor Constantine; the magnificence of the basilica that Constantine had built here was evidently of a measure with the significance of his world-changing decision to make Christianity the official religion of the Roman empire. The words of Bishop Eusebius, Constantine’s biographer:

“…a noble work rising to a vast height and of great extent both in length and breadth….The inner part of the roof… like a vast sea over the whole church and, being overlaid throughout with the purest gold, caused the entire building to glitter as it were rays of light….”

Although it was almost completely destroyed early in the 11th century, you can still see some remains of Constantine’s church; but you have to go outside the present Holy Sepulcher complex in order to find it, as the the basilica was much larger than its replacement.

The Madaba map of Jerusalem, a 6th century mosaic discovered in a church now in modern Jordan, clearly shows Constantine’s basilica as being situated on the Cardo – the main north/south thoroughfare of Byzantine Jerusalem.

In the Alexander Nievsy church, a 19th century Russian Orthodox building just east of the Holy Sepulcher, there are some ancient steps which it is now believed were part of the original entrance to Constantine’s church, on the Cardo.

In the Nievsky church there are also the remains of some even earlier structures; an arch, which has been reconstructed, is believed to have been part of an entrance to the city in Roman times. This may even have been the the “Judgment Gate”, through which Jesus was led from the city to the hill of the crucifixion, as suggested by the painted reconstruction hanging on the wall.