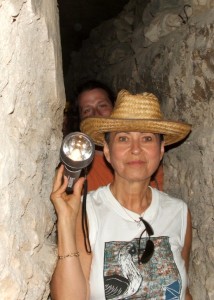 The size of any ancient city in Israel was limited by its water supply, and Jerusalem was no exception. The one source close to the city, the Siloam spring in the Kidron valley, was used from pre-Israelite times to provide water both for domestic purposes, and for irrigation of crops outside the city. After the temple was built by Solomon, and the city subsequently expanded westward, its increased water needs had to be met by digging cisterns to store rainwater in, and by building open pools and reservoirs to capture runoff water.

During the time of the Second Temple, Jerusalem began to outgrow all of these local sources of water; the Hasmonean king Alexander Janaeus (104-76 BCE) decided to solve the problem by building an aqueduct  – a new technology which had been introduced into the area by the Greeks – to bring water from one of the many springs in the Hebron hills south of Jerusalem. The closest of these was just 12 kilometers from the city, as the crow flies; however, because there were a number of hills and cliffs in between, the aqueduct ended up being nearly 22 kilometers long, as it wound around – or in some cases tunneled through – these obstacles.

This aqueduct was subsequently rebuilt by the Romans, destroyed by the Jewish rebels in the Great Revolt that ended with the destruction of the Temple, rebuilt in Byzantine times, and restored many times over the centuries, until finally the Ottoman Turks installed an iron pipe in it in the 19th century. The aqueduct was in fact one of the main sources of Jerusalem’s water right through to the 1920’s, when the British connected the city to a modern pumping station. Sections of it can still be seen today along its route from near Bethlehem, and at various places in Jerusalem itself.

Today you can step back into the ancient world of those Hasmonean engineers, and walk through one of the tunnels, that carry the aqueduct, as it burrows underneath Jerusalem’s popular Haas promenade.