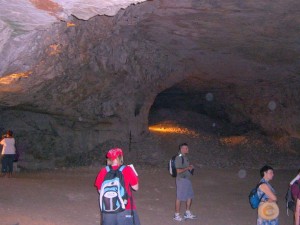 Where did the ancients find the stone to build Jerusalem ?  Sometimes, it was literally beneath their feet, in a cave below what is now the Muslim Quarter of the Old City. Before it became a quarry, “Zedekiah’s Cave” started out as a small natural cave, hollowed out of the limestone by the water seeping through the rock.  Although it is also known as “King Solomon’s quarries”, it is unlikely that it provided stones for the building of the First Temple. It was probably later  – in the 7th or 8th century BCE – that it first began to be quarried to supply stone for the expansion of the city and of its fortifications. The name “Zedekiahs Cave”, is based on the Biblical story, that Zedekiah, the last King of Judah, fled from Jerusalem to Jericho through this cave, when Jerusalem was under siege by the Babylonians in 586 BCE.

The cave – so conveniently situated under the city – was used extensively during the Second Temple period as a source of the white limestone, locally called “Melekeh”, meaning Royal – much sought after for building, because it is not too hard and it does not flake off.  It is estimated that about 350,000 tons of rock were quarried out of the cave – tripling its original natural size. Certainly, it is now the largest artificial cave in Israel; it extends 9,000 square meters underneath the houses of the Muslim quarter, with an average height of 15 meters.

The cave was known about in medievel times, but then was forgotten until its accidental discovery – by the dog of an American scholar, James Barclay – in 1854. Since then, it has served a variety of purposes – including as a banqueting hall for Freemasons !

The cave is well worth a visit today;  The entrance is just under the northern wall of the Old City between the Damascus Gate and Herod’s Gate. Inside, you can see the places in  the walls where huge blocks of limestone were removed in antiquity – probably most of them for the immense building works of Herod the Great. Further inside, you will find Zedekiah’s spring and, if you look hard, who knows, you may find the hidden passage through which king Zedekiah escaped to Jericho.