Water for the Temple in Jerusalem 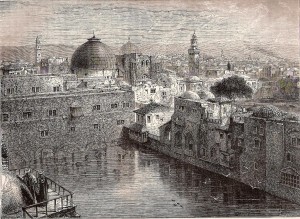 Jerusalem’s Old City today bears the marks of its many past owners and occupiers  – Ottoman walls , Mameluk Khans (Inns)  and Crusader churches are all much in evidence here. Neither is it too hard for the visitor to find substantial traces from even earlier periods – early Islamic, Byzantine, Roman, and of course the Herodian remains from the time of Second Temple. Most visitors hoping to see remains of an even earlier period – the Biblical period of the First Temple – make their way to the area outside the current walls, known as the City of David. There they can see the ancient fortifications of the first inhabitants of Jerusalem, stand over the Siloam spring where Solomon was annointed king, and walk through the water tunnel built by King Hezekiah’s engineers two thousand seven hundred years ago.

By the time of King Hezekiah, Jerusalem had in fact expanded westward and northward beyond the area of the City of David, so there are also remains from that period to be found inside the walls of the Old City.  One of these is inside the area of the St Annes Convent in the northeastern quarter of the city, off the Via Dolorosa. Here there is a little valley which was called Bethesda. The place acquired much significance for Christians because of its association as the birthplace of Mary, and with one of Jesus’ miracles. There are the ruins of two churches here as well as one of the best preserved Crusader churches left in Jerusalem.

Before any of this however, in the 8th century BCE – the time of Hezekiah or perhaps earlier – the little valley was dammed.  Jerusalem is a city with very few water sources; until the Hasmoneans brought water via an aqueduct from springs near Bethlehem, the only reliable source of water was the Gihon spring; but that is way south of here, and it ran southward away from here toward the Hinnom valley and the Siloam Pool. As Jerusalem expanded in the 8th century, more water was needed to meet the needs of the growing population.  The Temple in particular – just south of here – needed a regular water supply –for the sacrifices and libations.

Damming this valley meant that that the rain water, instead of running off and being lost, built up into a reservoir behind the dam. In fact, a channel has been found leading from a sluice gate in the dyke southward toward the Temple Mount. As you stand looking at the foundations of a Byzantine basilica, you are in fact looking at the original dyke built to ensure a supply of water to Solomon’s Temple.