Images in the Synagogue

In Kibbutz Hefziba, near Bet Shean, you can see the remains of the 6th century CE Bet Alfa synagogue. It has a beautifully preserved mosaic floor, in which the central element is a zodiac, with a representation of the pagan sun god Helios riding his four-hourse chariot in the middle. This type of decoration was apparently not at all unusual in the Byzantine period in the Land of Israel – the 4th though 7th centuries CE; at least five other synagogue mosaics have been excavated, which similarly display a zodiac – often with Helios at the center – and with the various signs of the zodiac illustrated with human figures. How can we account for this apparently blatant disregard for the traditional avoidance of human figures in synagogue decoration  – not to mention the infringement of the Biblical commandment to shun images ? 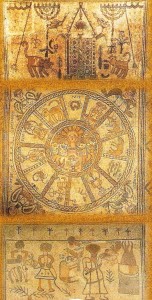 By the end of the 4th century Christianity had largely replaced paganism in the Roman world; Christianity had in fact coopted many of the old pagan images of the Greco-Roman pantheon, and used them in church decoration. Once such images had lost their pagan significance – so the argument goes – they were no longer in danger of being seen as objects of worship – which was the real prohibition of the second commandment – and could be used with impunity to decorate the synagogue. It is no  doubt true that Jews of the time were influenced by the prevalent cultural/religious style, in their synagogue design. There is even some evidence that the same artists may often have been responsible for mosaics in both synagogues and churches.

If however we look at the rest of the mosaic at Bet Alfa – in which the zodiac is framed at one end with pictures from the Biblical account of the Binding of Isaac, and at the other end with representations of objects associated with the Temple – a different picture emerges. In common with that of their Christian neighbors, Jewish art of the time was highly symbolic – imbued with meaning – rather than just decorative. Viewed in this light, the whole mosaic represents a continuum, in which the Divine promise to Israel, represented by the Binding of Isaac, culminates in a  redemption, symbolized by the Temple. The promise and its future fullfillment are mediated by the zodiac – the regular procession of the seasons of the year and their respective observances – the unavoidable juxtaposition of the spiritual world and the temporal.