A Tale of Two Rivers

South of the Kinneret, near Bet Shean where the Yarmuch River joins the Jordan, there is a place called Naharayim – meaning “two rivers”. It is the site of the most ambitious hydro-engineering project ever brought to fruition in this country. In 1923, Pinhas Ruttenberg, a Russian engineer who had studied hydro-engineering in Italy before coming to Palestine, applied for a license to harness the water of these two rivers to create electricity. In those days – before the Israel National Water Carrier began to tap the Kinneret to supply the country’s water needs – the flow of the Jordan south of the Kinneret was considerable. Combining it with the flow of the Yarmuch, which drained the whole of the Golan Heights, made the project feasible. 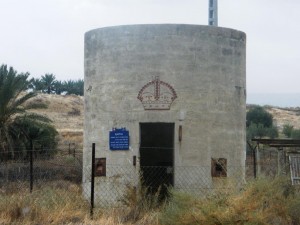 Ruttenberg built a dam at the point where the two rivers converge, creating an artificial lake with a sufficient head of water to power six turbines in a generating plant,  built half a kilometer south of the lake. From 1932, when it started operating, the plant produced 18 megawatts of electricity – sufficient to supply the entire energy needs of the city of Haifa. To the east, Ruttenberg also built a model village for the workers at the plant. At that time the whole area was easily reachable from Haifa, by the Jezreel valley railway line, built and operated by the Mandatory government; although the trains haven’t run since 1948, the local station can still be seen there today.

Straddling the Jordan River as it did, the whole thing came to an end in 1948, when the Arab Legion attacked the area. However, the 1949 armistice agreement left a chunk of land east of the Jordan in Israel’s possession, which was subsequently used for cultivation by two nearby kibbutzim. Under the terms of the 1995 peace agreement with Jordan, this area – the “Peace Island”  – was returned to Jordanian sovereignty, but the kibbutzim were allowed to continue using it for agriculture. Today, as “guests” of these kibbutzim, visitors from Israel can cross over freely and see the remains of Ruttenberg’s great project.

In a tragic incident in 1997, a rogue Jordanian border guard shot at a group of visiting schoolgirls, killing seven of them. The Jordanian government, determined to avoid any further such tragedies, now stations there only its most trusted soldiers from the royal household regiment. Today, as you pass over the bridge to the island, you get a friendly wave from the soldiers on duty at the guard post – an old British “pill box”, now decorated with the crown of the Hashemite kingdom.