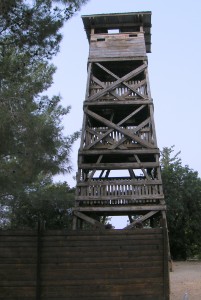 Two kibbutzim in northern Israel preserve memories of the pioneering days of Jewish settlement of pre-state Israel. Kibbutz Nir David in the Ein Harod valley near Beit Shean, and Kibbutz Hanita next to the Lebanese border in the Western Galilee were both founded as part of  the “Tower and Stockade” settlement program, and you can still see these famous “frontier” structures in these kibbutzim today.

In November 1947, the United Nations voted to partition Mandatory Palestine into a Jewish State and an Arab state. However, already 10 years before this, it was clear to the far-sighted David Ben Gurion that a “two state solution” was bound to emerge sooner or later. It was also clear, from the way that earlier partition proposals had been drawn up, that  – when it happened – facts on the ground would determine the borders of these states. This was the impetus for the “Tower and Stockade” program, which saw the founding of 57 settlements in the three year period between 1936 and 1939. The objectives of the program – to stake out territory for the future State of Israel – meant that most of them were planted in the middle of potentially hostile areas.

The founding of one of these settlements was therefore always a dramatic event. On the appointed day, a convoy of trucks would leave from another nearby settlement under the cover of darkness, headed for the location – usually a hill top – of the new settlement. During the night they would dig ditches as a first line of defense, so that, when morning came, they were prepared for any attack. The real test however would come on the second night, when the new settlers no longer would have the benefit of surprise. So, during that first day, they had to erect the stockade and the tower.

Both the watch tower and the stockade were built of pre-fabricated wooden sections, which were carried up on the trucks. The stockade was a double wooden defense wall that was filled with gravel to withstand bullets. Arthur Koestler, in his novel Thieves in the Night, wrote a vivid description of the founding of one of these settlements. In it, he describes the back-breaking work of erecting the stockade walls, and the heart-stopping minutes when the watch tower, laying horizontally on the bed of a truck, was winched upright into its position on the hill. Although most of these original wooden towers and stockades have now disappeared, the full-size replicas at Nir David and Hanita, still evoke the feelings of those pioneering days and nights.