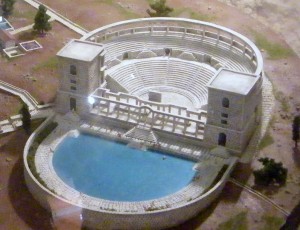 Herod the Great’s magnificent port of Caesaria was a state-of-the-art Roman city. It had a theater, a hippodrome (chariot racing track), a temple to the emperor Augustus, Herod’s deified patron, and of course, many elaborate fountains and bath houses. In the years after Herod’s death, Caesaria continued to grow – both in size and importance –  becoming in effect the administrative center for the whole of Roman Palestine. Eventually, the city needed three aqueducts to supply the water needs of its population; two of these can still be seen today, marching down the beach toward the city from the north.

The oldest of the three aqueducts carried water from the Shuni spring only eight kilometers away from Caesaria, up on the other side of the Carmel ridge, which starts to rise at this point along the coast. There were in fact two springs at Shuni; in addition to the one supplying Caesaria, the other one was used locally to supply what can only be described as a luxury water recreation center for the Roman upper classes.

This building – unique in Israel – consisted of two half-circles, one of which was a theatre, the other a swimming pool. Parts of the mosaic floor of the pool can still be seen today, complete with what look like lane markings.

What actually went on at Shuni during Roman times were the Mayumas celebrations – pagan water rituals. These rituals were probably licentious in nature, giving rise to a dire warning in the Jerusalem Talmud. Later on, during the Byzantine period, Shuni aquired a more wholesome reputation as a health spa, and its waters as a source of increased fertility.

Today, the restored theater is used for musical and other events. There is an antiquities museum there displaying some of the fascinating finds discovered at Shuni, including a beautiful coiled bronze serpent, – the ancient symbol of Aescapulus the god of healing. The site is now part of Jabotinsky Park, and includes a museum to Lehi, the pre-state defense organization.