What’s a ‘Makhtesh’ in Hebrew? 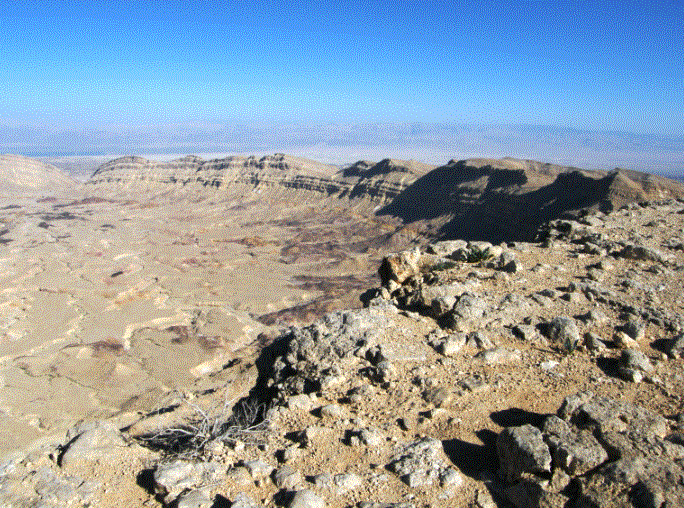 As you travel south from Beersheba toward Eilat, the road takes you down through a  gigantic, steep-walled depression in the Negev desert known as Makhtesh Ramon. From Mitzpe Ramon, the town on its rim, the road descends through 400 meters on to the floor of the depression, and continues south past the remains of an extinct volcano and many other remarkeable geological features. Although “Makhtesh” is popularly translated as “crater”,  it was not created by the impact of a meteor, as the word crater would imply. Makhtesh Ramon – along with two others in the Negev – is the result of geological processes that are unique to the Negev desert; so much so, that geologists the world over in fact now refer to this type of feature as – a makhtesh.

The makhtesh is the result of ancient formations of soft sandstone being covered over by harder limestone and dolomite, and then the whole area being uplifted by tectonic forces – forming a high, broad ridge.  When at a later stage, the ridge was covered by a shallow sea, its limestone “cap” was removed by the action of the water, leaving the underlying sandstone exposed to the elements. Over the geological ages, water found its way inside the ridge, carving out river beds, dissolving and carrying away the soft sandstone, until what was left is this gigantic depression surrounded by precipitous limestone walls.

Ramon is the makhtesh that many people know, because it is traversed by the main road to Eilat. However, there are two others – known simply as “The Big Makhtesh” and “The Little Makhtesh”, which are slightly more off the beaten track. The Big Makhtesh is just to the east of the town of Yeruham, and you can drive through that too. The Little Makhtesh is to the north east from there, and is only accessible on foot. In all three of the “makhteshim”, you can do some wonderful hikes; just remember to take a hat, sun protection and plenty of water with you, and – to keep to the marked trails.