During the Second World War, London fire fighters covered the city with hundreds of kilometers of metal 6-inch diameter water pipes to extinguish the fires caused by the German V-1 and V-2 rockets. When the war ended, these pipes were no longer needed, and were acquired by Jewish organizations for a vital project in the south of Israel.

By the end of 1946, there were 28 settlements that had been established in the western Negev – the area between Beersheva and the mediterranean coast. In this arid region, the main problem for many of these settlements was of course that of acquiring a reliable source of water. A huge source of underground water had been discovered by Kibbutz Nir-Am. The problem was how to exploit this water for the benefit of other Negev settlements. 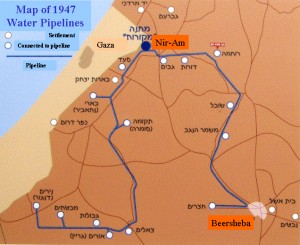 Leaders of the settlement water authority heard about the metal pipes in London from members of the Hagana, the pre-independence defence organization, who were in Europe at the time, trying to buy arms and ammunition. They were instructed to purchase as many pipes as possible, and send them to Nir-Am. In a period of eight months, more than 200 kilometers of piping were laid, creating two water pipelines – one supplying eight settlements on the west, and one on the east supplying 6 other settlements. The British mandatory authorities allowed the laying of these pipes on condition that they would also supply water to the Arab centers, which was in fact the case until active hostilities broke out at the end of 1947.
Until the mid 1950’s, when the National Water Carrier was brought to the Negev this water pipeline was the lifeline of the Negev settlements. After that, the pipes – which had all been laid underground during the War of Independence – became redundant, and were forgotten about.  You can however now see some sections of the original pipeline, which have recently been exposed at Gvulot and at Ruhama. In kibbutz Nir-Am, where the pumping station was located, there is a small museum in the kibbutz dealing with water and defense – but none of the pipes have yet been found.